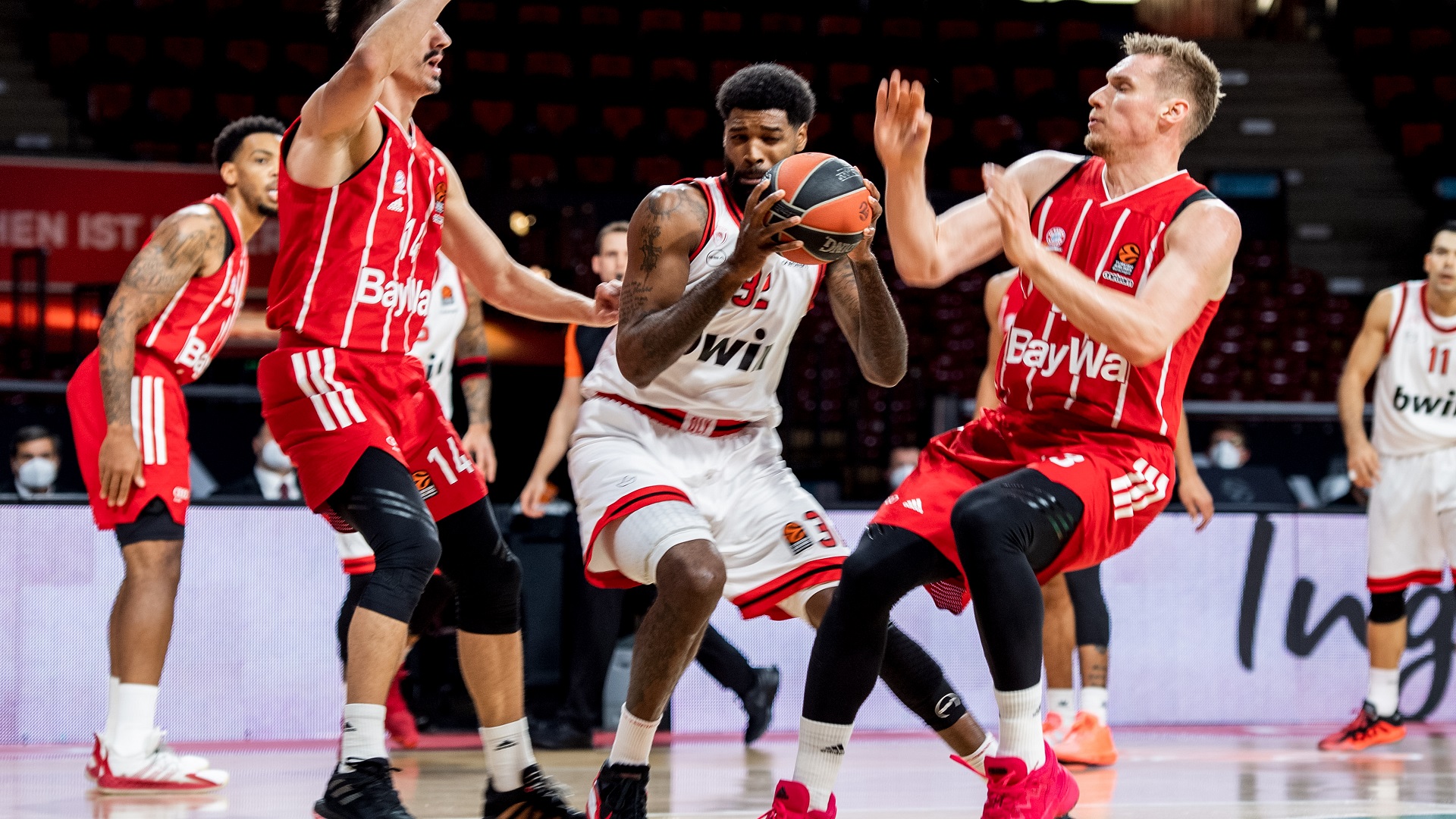 The ‘reds’ unsuccessful in Munich

Olympiacos did not succeed in Munich. The ‘reds’ lost to Bayern 68-74 for the 5th round of the Euroleague. 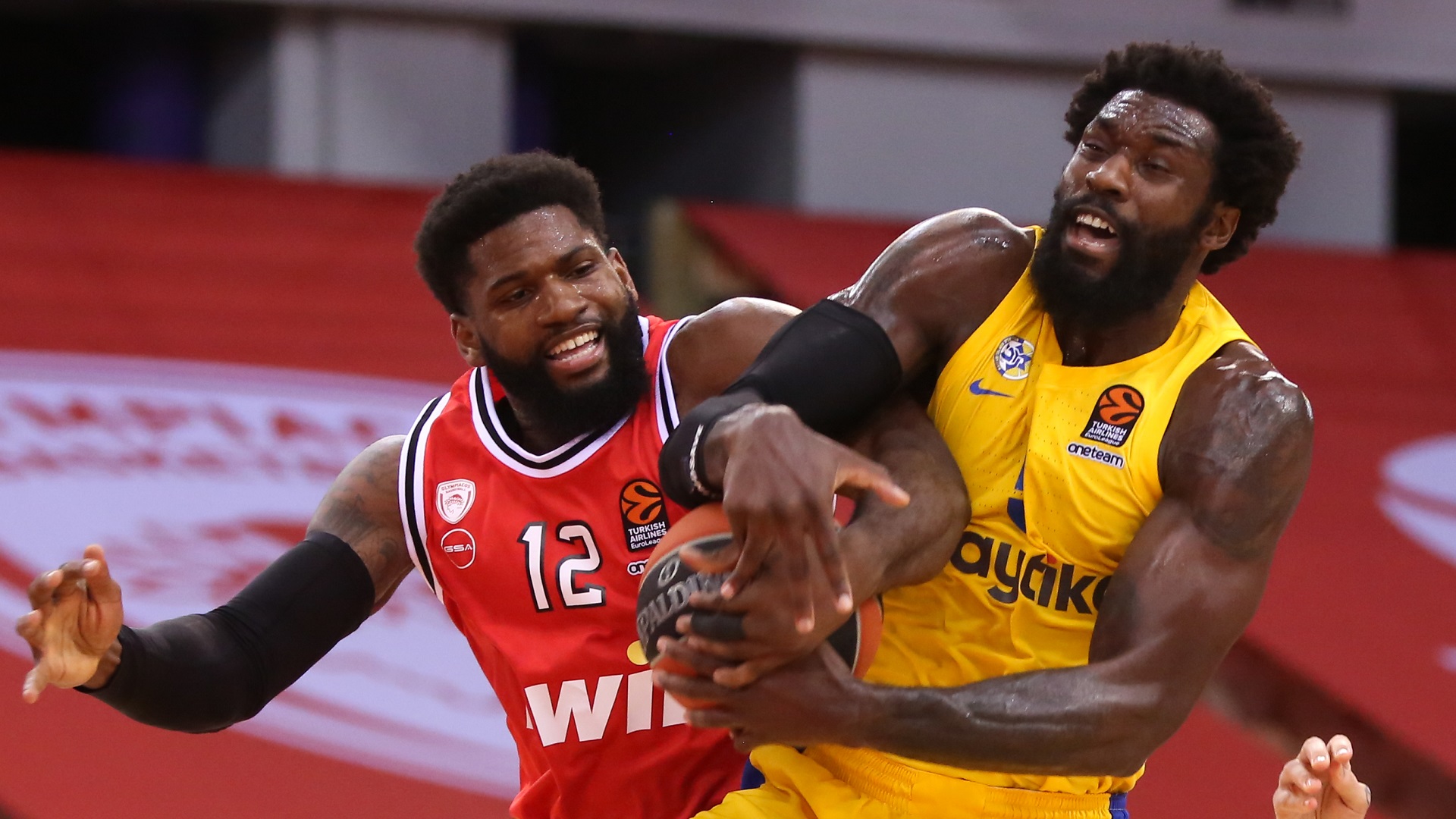 Harrison for the win!

A triple by Aaron Harrison at the buzzer gave Olympiacos the 85-82 win over Maccabi Tel Aviv, closing the double-round Euroleague week for the ‘reds’ with a perfect two for two record! 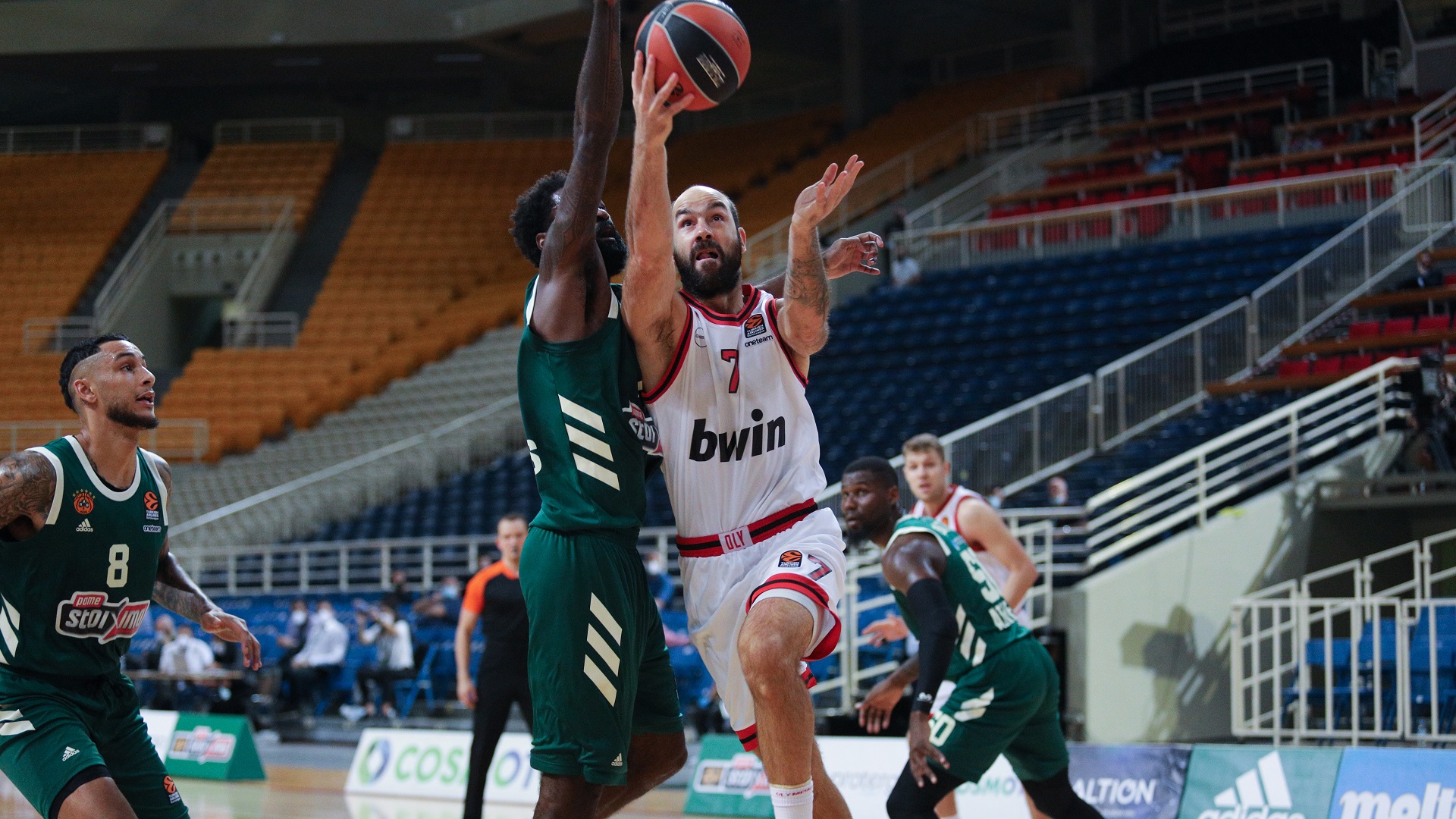 The ‘reds’ win at the OAKA!

Olympiacos beat Panathinaikos at the OAKA 78-71 for the 2nd round of the Euroleague, hence scoring its first win for this season’s competition.

Playing good defense and with Giorgos Printezis playing a leading role, Olympiacos set the tempo and got to lead by 12 (7-19) at 8’. Kostas Sloukas received a blow from an opponents’ knee and was withdrawn in the bench for the remainder of the first half. Nevertheless, despite his absence, the ‘reds’ succeeded with Sasha Vezenkov and Charles Jenkins to increase the distance even further (15p., 20-35 at 15’). Panathinaikos closed in at 10p., with a 5-0 streak scored by Vezenkov and McKissic Olympiacos took the lead to +15 (29-44), however, during the last couple of minutes nothing worked correctly for our team… Bad offensive decisions and defensive voids, allowed the hosts to close in at 9p. with two back to back threes (35-44) by the end of the first half.

The ‘greens’ came even closer in the second half (40-46), but Olympiacos reacted immediately, and with Giorgos Printezis leading once again, regained control (44-58 at 25’). However, turnovers and bad choices allowed the hosts to close in at 4p. (58-62 at 31’) after running a partial 14-4. Relying mostly on their defensive game together with some inspired moments by Shaquielle McKissic, Bartzokas’ players slowly but steadily regained control (62-72 at 37’). Panathinaikos tried to return to the game ‘striking’ from the perimeter (67-73 at 38’), however, the team maintained the distance by weaponizing its good defense and sealed the victory. 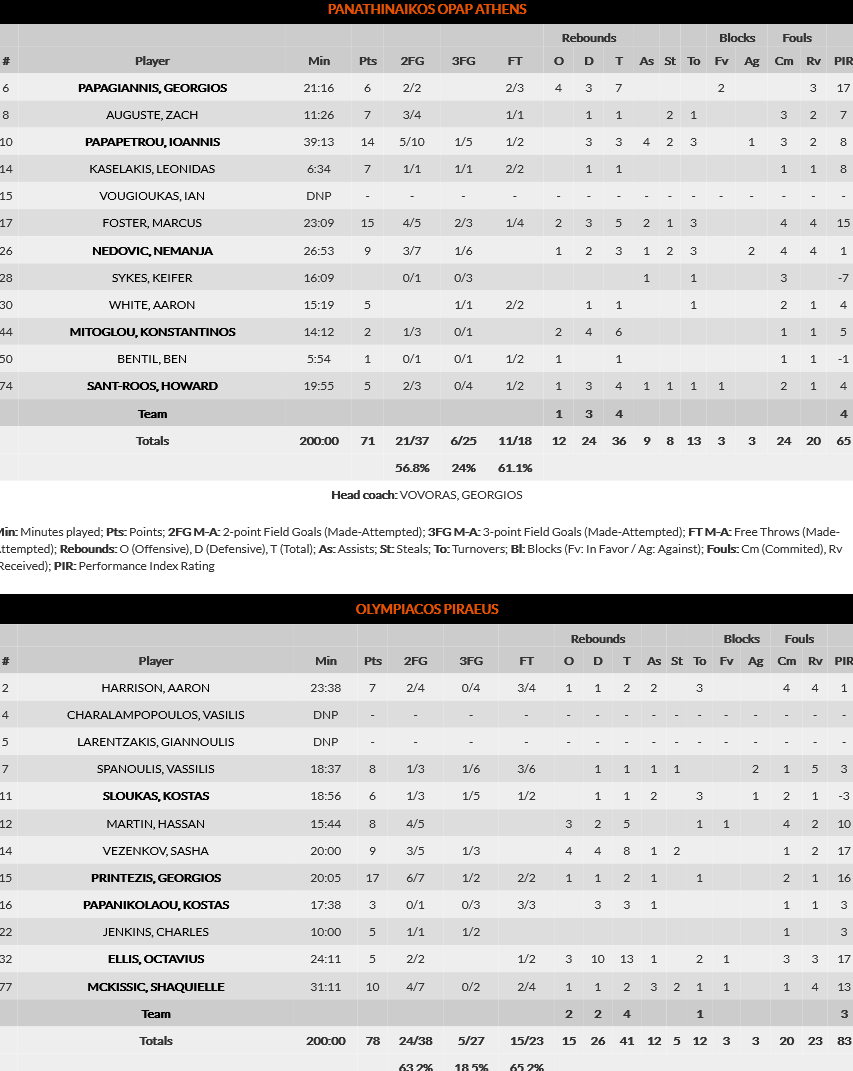 "Rebounding was the key"

The coach of Olympiacos, Giorgos Bartzokas, commented: “It was a typical game from the first ones in the season, without high levels of quality. It’s only normal, all teams have problems scoring. The level and the quality are not indicative of the teams’ potential. It was a special game, a derby. You can see how low the three point percentages were. Despite our three point percentage, we won and that’s important. I would like to give credit to my players for an important victory. We got six rebounds more than Panathinaikos, that is very strong in rebounding. I give them credit, because we had emphasized that part. That was the key. We made some tactical mistakes in the last quarter, but we stopped Panathinaikos at 14 points and made only one turnover and that at the very end. When you wish to control the game, you can’t be making mistakes, you need to be finding the defensive weaknesses. I wish good luck to Panathinaikos. As for us, the schedule is difficult, we have a double games week ahead of us and we need to be ready”.

Asked whether the absence of more derbies between the ‘eternal’ rivals is an element lacking from Greek basketball, he replied: “There’s no doubt about it. I see the importance these games have for the fans of both teams. Especially now, that we don’t have that many options in our lives and we watch sporting events on TV. I wish there were more, but that’s how it is. I have missed these games. I have come here as an opponent with Barcelona, Khimki and Lokomotiv. However, what’s really been missing is the fans from the gyms, even if the fans are hostile towards you”.

On whether the absence of fans had an impact on the levels of concentration of his players, he commented: “I don’t have an answer for that, you need to enter the players’ minds. The level of the game was a low one, but that’s not only due to the fans. We have better communication now. But the emotions the fans create into both the players and the refs always play a role. To not make suppositions, I repeat that basketball is made to be played in front of fans. Either they are hostile or with you”.

Finally, for the low percentage of the ‘reds’ from the free throws line, he said: “It’s still early in the season. Only one team scored 80 points in the 1st round. The team’s that have the same core of players and the same coach are more ready than others. There are teams that had been playing more recently together, their leagues ended later. Let me also point out something: Teams that have coaches who have worked in the USA are readier earlier than the rest. That is Fenerbahce and Zalgiris. Because the preseason is shorter in the States and hence the team are ready earlier on”. 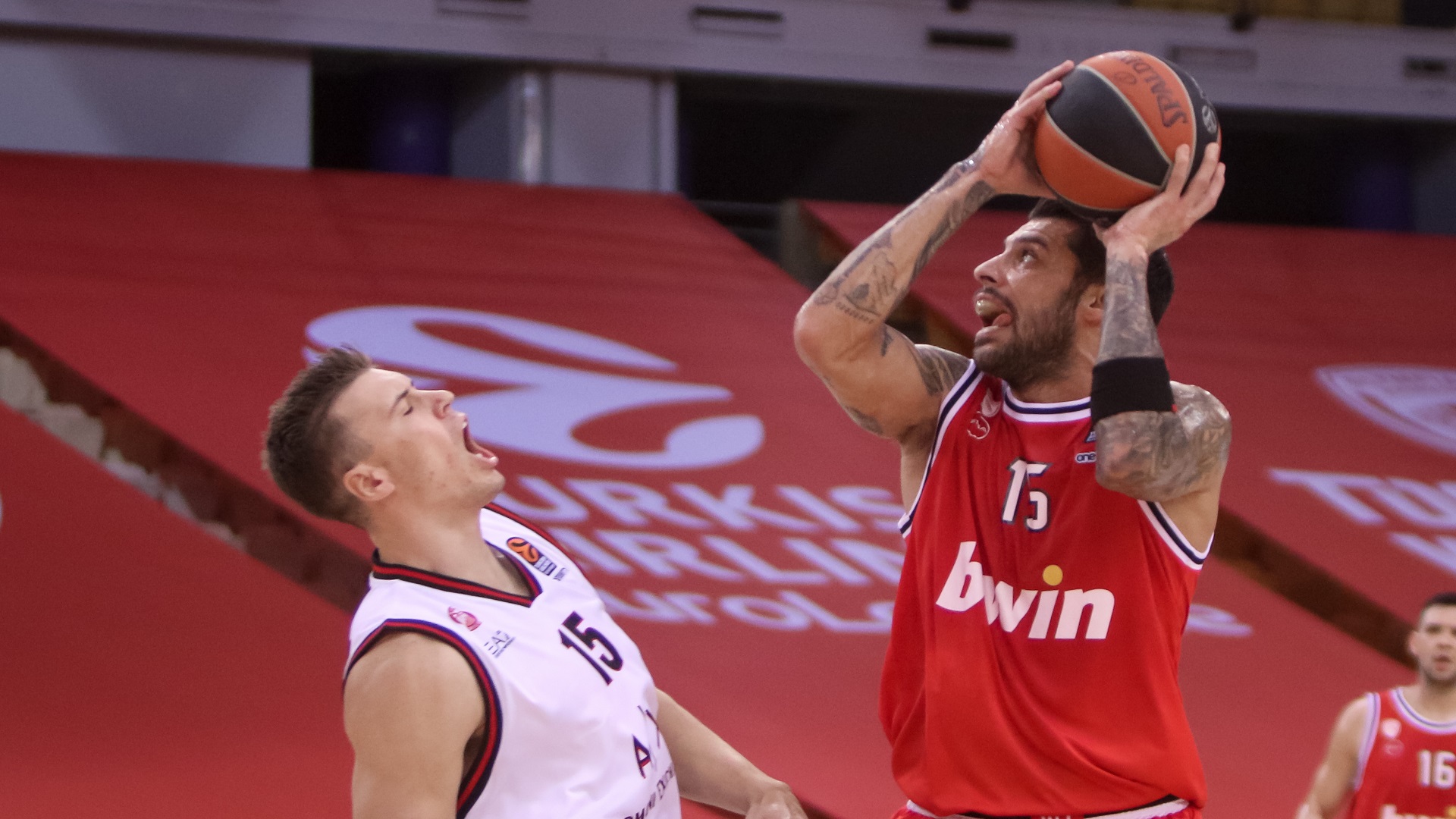 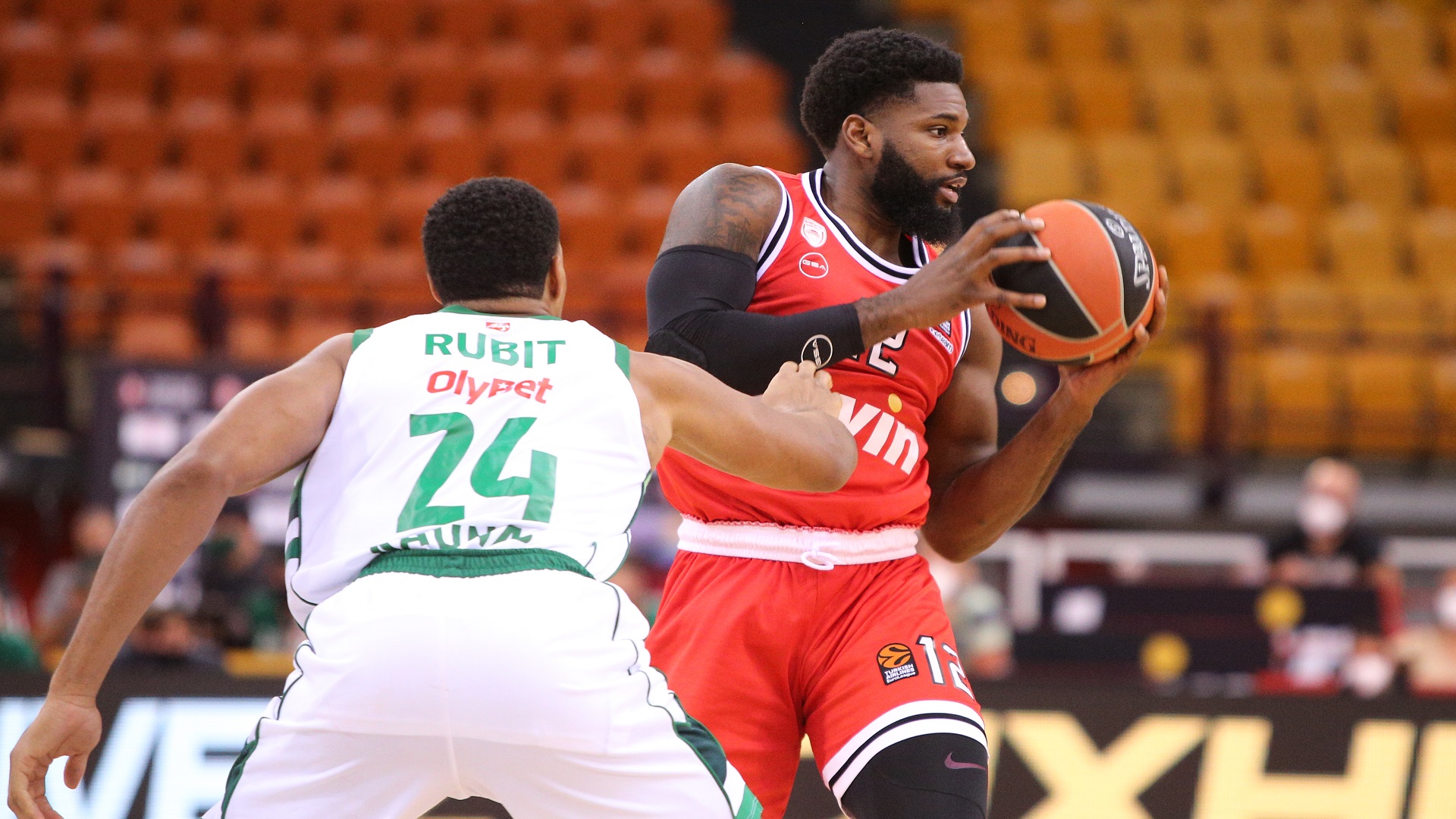 A defeat in the premiere of the Euroleague

Olympiacos lost to Zalgiris Kaunas 67-68 at the SEF, in the Euroleague premiere.