Olympiacos fought to the end, however, did not succeed in coming back with a win from Barcelona. The ‘reds’ lost to the ‘blaugrana’ at overtime 79-78 (67-67 at the end of regular time) and is now solely focusing on the Friday home game (15/10, 20.00 CET) against Zalgiris Kaunas.

Relying on their excellent defensive game, the ‘reds’ managed – despite their many turnovers – to set the tempo and close the first quarter leading by 7 (10-17).

The ‘blaugrana’ closed in to one bucket at 15’ (18-20). However, Olympiacos – continuing playing effective defense – took advantage of their terrible perimeter percentages (0/12 threes in the first half), found solutions when attacking with Livio Jean-Charles, Thomas Walkup and Sasha Vezenkov and closed the first half at +5 (27-32).

The hosts began finding target from the 6.75m. line in the second half and with Mirotic leading the majority of the offensive plays they turned the tables and got ahead by 9 (47-38 at 27’). The Bartzokas’ players got to react though and with Kostas Sloukas and Fall closed in to 2p. (49-47 at 29’). Two back to back threes by Barcelona at that point though took the margin once again at 8p. (55-47) at the end of the 3rd quarter.

The hosts were leading by 9 (58-49 at 33’), but Olympiacos once again betting on its defensive prowess, once again tied the game (61-61 at 38’) and turned the game into a fist class derby. The ‘reds’ even had the chance to seal the victory during the regulation, however, a needless foul by Martin (33.7’’ before the buzzer) allowed Kuric to tie the game (67-67) making his free throws and a missed shot by Kostas Sloukas with 11’’ to go led the game to the prorogation.

Leaning on Mirotic, the ‘blaugrana’ found themselves leading by 5 (75-70 at the 3rd minute of the overtime), but Olympiacos replied with a partial 8-2 and got ahead 78-77 (22’’ for the final buzzer). At around 7’’ before the end, Fall was charged with a foul against Oriola during rebound challenging. Oriola made his free throws and wrote the final 79-78, since the shot Kostas Sloukas took at the buzzer was off target. 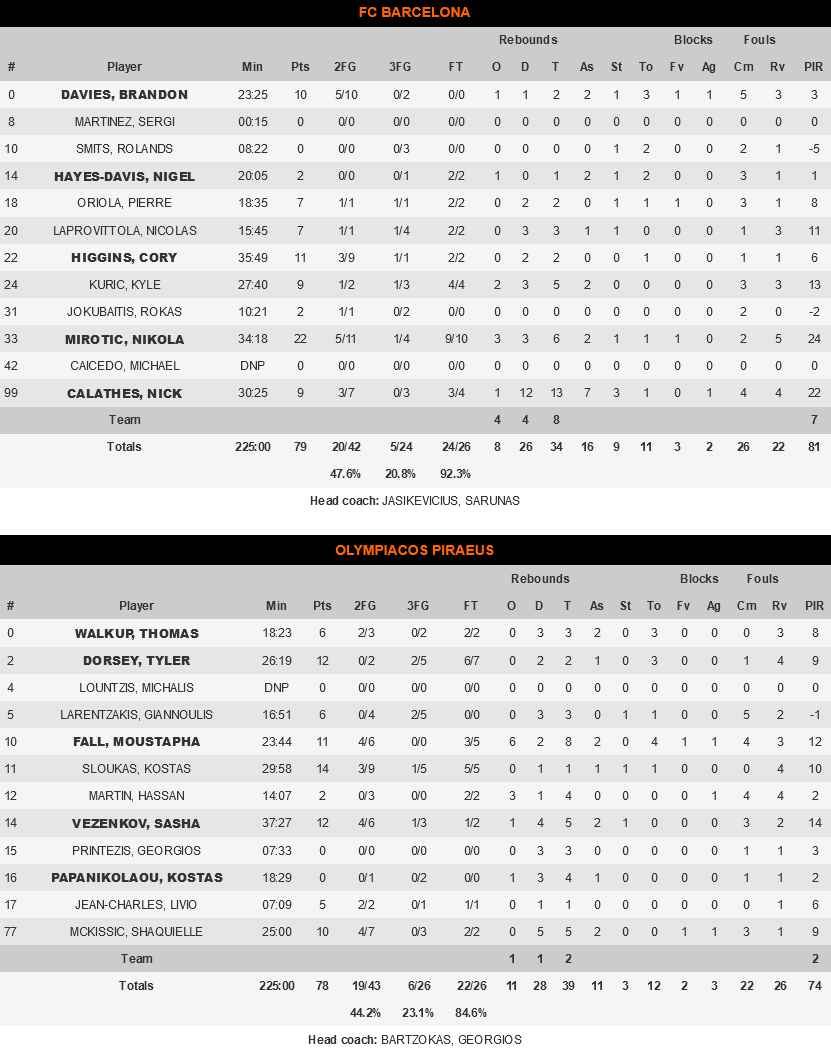